Maybe it’s just me, but a good bit of stage combat does wonders for my appreciation of a show. I also happen to love a slight element of unpredictability – the need to ad lib within a story thanks to an unexpected twist or element. I furthermore enjoy fantasy, adventure, and the passionate work of Otherworld Theatre here in Chicago. Add in a witty Game Master and the occasional roll of a 4-sided die, and I’m sold.

Otherworld’s “Fight Quest” is an adventurous, funny, delightfully self-aware show where the audience helps choose the outcome of the story. The Game Master (Bennett Bottero, who is also the “Fight Quest” playwright) introduces the concept in pretty straightforward terms: he has created four ‘avatars’ and will choose an audience member to be the player for this game. The player then chooses an avatar (the Rogue, the Monk, the Ranger and her Wolf, or the Barbarian), and the GM narrates the story – tailoring each chose and twist in the road specifically for that chosen avatar. Along the way, there are mini-games, puzzles to solve, and gambles to make, all unfolded by the player’s choices on how to guide the avatar.

It is innovative, exciting, fun theatre, full of game/fantasy/pop culture references. The cast does a magnificent job of treading the fine line between ad-libbing to riff on whatever reference was made and keeping the intense integrity of a hero on a fantasy quest facing down their cruelest foes. Grace Gimpel‘s Rogue is smirky and saucy, quick with her daggers and unafraid to spin and leap from the Public House’s stage to the ground floor without even looking. The Ranger (Moira Begale, also the director of the piece) is stern and aloof as any elf should be – and wields a broadsword in harmony with her Wolf companion’s vicious flying kicks. The two of them have a few really cool assist moves that had the audience stomping and roaring for more. Kai Young as the Wolf is seriously one of the best parts of the show – committed, impressively athletic, and also the fight choreographer. The two avatars chosen the night I attended were the Monk (played to stoic yet charismatic perfection by Brendan Stallings) and the Barbarian (the impressive and astonishing Justin Verstraete).

Of the avatars, the Monk was the only one to this point who had not ‘debuted’ before an audience, so the player chosen from the audience eagerly selected the Monk to start the evening off. Even when the player’s choices caused hilarious script modifications, Stallings kept his composure as the Monk, and performed admirable feats of quarterstaff and acrobatics. His fight against the Barbarian is particularly well-choreographed and performed.

The Monk’s turn in the story (a game module Bottero’s GM calls “The Bandits of Hollow Hill”) was so speedy that at the end, the performers decided to do another round. A brief intermission later, a new player from the audience was chosen, and a new champion – the Barbarian.

Part of the introduction to the game is having the audience player decide on their avatar, then choose the avatar’s name and where they’re from, or what title they hold. When the new audience player selected the Barbarian, it was decided (perhaps a little too quickly for the player himself to realize the joke he was making) that this Barbarian would be known as Randall the Savage. Instantly and seamlessly, Verstraete launched into a full Macho Man impersonation which threw the audience into uproarious laughter that did not die down perhaps for the entirety of his run of the story. “Mmmm-mmm!”s and “Yeeeeah”s punctuated every narration the GM provided, and the physicality and gestures were as natural to Verstraete as what I imagined his ‘regular’ performance track to be like. It wasn’t only impressive – it was hilarious, and not a single person in the room (wrestling fans and non-fans alike) was immune to the comedic brilliance.

I guess you could say Verstraete rolled a natural 20 that night.

Anyone who has ever played D&D or read a Choose Your Own Adventure book will understand the formula, and will enjoy this production to its fullest, but the entertainment is real for anyone who sees “Fight Quest.” Because it is different every time, I strongly encourage you to see it – and see it twice if you can. Each avatar is worth watching as the champion, and audience decisions are always a recipe for hilariousness. I praise Bottero’s genius scripting and theatrical model for a unique experience that will not easily be forgotten – and nor would I want to forget it. The lights and sound design do a good job transporting us to various locations in the story with no set pieces (the Public House Theatre is small enough that the fighters need all the space they can get for movement and safety). Perhaps most notably, Stefanie Sajib Johnsen’s costuming is exquisite. Each piece is beautifully made and each avatar is perfectly suited up for battle – the Ranger in elven greens, the Rogue in poisonous purple, the Monk in exotic orange, and the Barbarian in brutal brown with blue face paint. These are not home-cobbled cosplays, they are well-made and well-executed and do the rest of the work transforming the space into a real-life fight in a tabletop roleplaying game.

Otherworld productions are consistently smart, ambitious, and fun to attend. Do yourself a favor, and seek out “Fight Quest.” 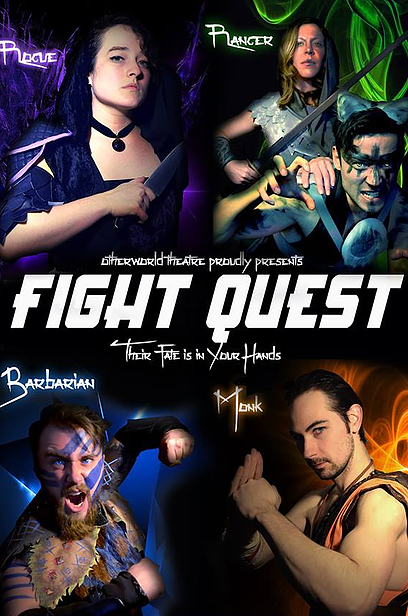 1 thought on ““Fight Quest” is an Otherworld-ly, Excellent Adventure”