Glory be! We finally made it to Cinderella! It’s been an appropriately long time since I watched this one, and I’m glad we got through the odd and inconsistent 1940s package films to reach the golden, dreamy 1950s. Cinderella is in many ways the ‘number one’ Disney Princess, although Snow White is the first. If you check Google Images, Cindy is usually pictured at the center of the Disney Princess flying-v line-up. Observe:

While perhaps our modern sensibilities and craving for fierce, fearless ladies in leading roles may tell us that the earlier Disney Princesses are weak or wimpy, I’d like to encourage you all to remember that Snow White was fourteen years old and Cinderella was one of the most humble, dignified, good-hearted people on the planet. Let’s begin, shall we? 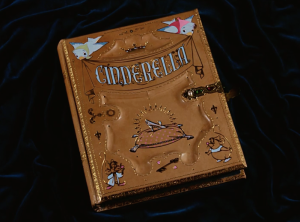 Commedia Bonus: 18 – mostly the mice versus Lucifer – and Lucifer is totally a Pulchinella type. Also worth noting, there are several comic duos featured in this movie: Gus and Jaques, Drusilla and Anastasia, the Duke and the King.

Up Next: Get out your teacups and your croquet flamingos… it’s Alice in Wonderland!

2 thoughts on “Disney Odyssey #12 – If the Shoe Fits, Marry Her Immediately”