Well, friends, it’s been a while since I posted here, and I do apologize for that. If you’re following me on any other social media platforms you’ll know the gist of what’s been going on, and if not, I hope this will catch you up on the deets.

On November 4th, 2017, Drew and I packed up a UHaul van with all of our earthly belongings and hitched his old car Betty to a tow dolly on the back, and we left Chicago. Drew had lived there seven years, and I had been there eleven years, but it was high time for a brand new adventure. So off we went, and two days later we arrived in Orlando, Florida. We moved into our new place, began to buy new furniture (we had none with us) and started to settle in to a brand new city where neither of us had ever lived before.

After! (it was damn hot in Orlando the day we moved in)

Drew is working at his old job still – they’re letting him work remotely from a different office of the company. I have been working on some audiobooks for award-winning author Candace J. Thomas and also been preparing for upcoming opportunities here. We’re both auditioning and chasing dreams, and treading water till the next thing happens.

As far as creative pursuits go, Drew and I have spent the last seven or eight months taking a break from Disney Odyssey. We intend to get back to it soon, since we have so many still in the bank from the last round of viewings. But we’ve been very busy with Warda, our real creative brainchild.

Warda is a little bit Game of Thrones, a little bit Downton Abbey, with a dash of Agatha Christie thrown in. It’s luxurious and glamourous on the surface with heartfelt conflict and sociopolitical commentary underneath. It’s been a THRILLING experience to share it with the world for the first time – in May we started doing live streams of a roleplaying game set in the world of Warda (using the FATE system rules) on the One Shot Podcast Network’s channel on Twitch. We stopped doing those live streams in October right before we moved (for obvious reason) BUT the second big thing that came out of this venture is the podcast! You can check it all out here or here, or on your chosen podcasting platform. Even if you don’t know anything about tabletop RPGs, it’s a fantastic story, with great performances by all of our players and Drew as our primary GM (I drop in occasionally myself). Give it a try!

Despite the fact that we moved at the beginning of the month, I made sure to participate in this year’s National Novel Writing Month. This year’s theme and challenge I gave myself were unique: I wrote down short titles or phrases relating to Warda, one prompt for each day of November, and a few extra just in case. I challenged myself to respond to a new, randomly selected prompt every day, writing at LEAST the minimum of 1667 words (the projected daily minimum to ‘win’ NaNoWriMo). I told myself that I could write as much as I wanted, but I needed to have the minimum on each day’s prompt. This was an awesome plan! I gave myself weird and delightful and interesting prompts and I had FUN writing on each of them as the days trucked along. However, sometime in the middle of the month I found myself picking up each day with the previous day’s prompt, wanting to write more and ‘finish’ the scene, only to have the current day’s prompt yet to write. And sometimes I didn’t get to the current day’s prompt. But I didn’t count this against myself, since I was having fun and not censoring myself. I have several prompt yet to do, despite the month ending tonight (and despite the fact that I’ve passed 50k words!) so I intend to keep writing a bit every day and building those muscles up again to where they once were. I have, as you may know, been having some issues with ‘writer’s block’ and ‘impostor syndrome’ and other such hurdles, and I’m determined to shake it all off – FOR GOOD – and press on in my writing experiences and career. I’m looking forward to meeting some Orlando area writers soon – there appear to be several community groups I can join up with to meet fellow writers, take workshops, and support/be supported. I’ve never had a writing group or community before, not really, so I’m not sure what it will be like, but I’m happy to try it all out and meet some new friends!

The other magical thing that happened recently is small, talkative, and extremely cuddly. Yes, that’s right – we got a cat! Well, the cat got us. Found us. Whatever. On October 1st (with only a month left before we were supposed to move) we found a cat in Chicago. We took her inside for the night, then took her and had her microchip scanned the next day. We spent the next fourteen days frantically reaching out to the owners through the microchip company, but despite multiple voicemails and emails, they never contacted us or the chip company again. After ten days in Illinois, that’s animal abandonment, so we unexpectedly (but very, very happily) welcomed Queen Felicia to the family. 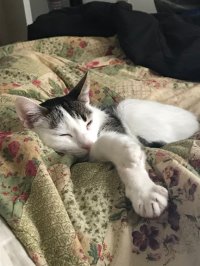 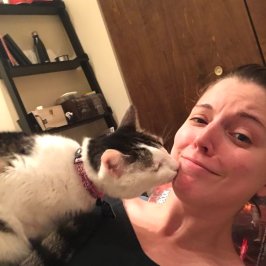 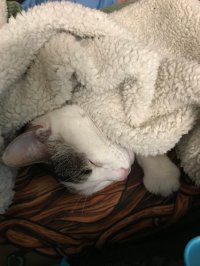 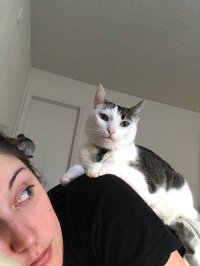 She hated the truck ride down to Florida but once we got here she was fine. She has filled our days with love, strange chirps, purrs, and nuzzles, and we love her more than we ever thought possible. She found us, and we’re so, so glad she did.

We are both missing our friends back in Chicago, but we’re eager for this new chapter to really settle into a rhythm. So many opportunities await, so many possibilities. We’re happy we made it here safely and we’re happy to get a chance at things we’ve always dreamed of.

Here’s to big leaps, and big dreams ahead!