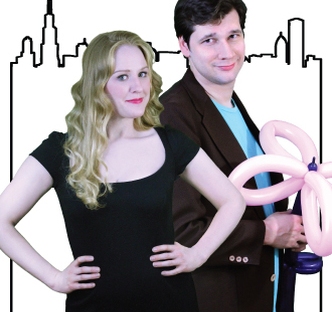 Sometimes I meet neat people who make neat things. I’d like to tell you about Mel and Jason, who are SUPER funny and made a super funny sweet rom-com that you should check out!

A tasty sample of something fresh cooked up by an artist of my choosing. 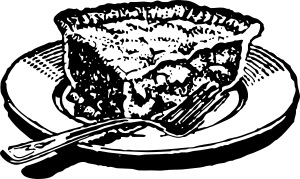 Jason: I’m Jason Peck, and I’m… well first of all I’m an English ex-pat living in Chicago. So that means it’s hard for me to toot my own horn. I’m trying hard not to write a joke and deflect. Okay. I’m an actor and comedian who wrote and produced a feature film screenplay. I’ve recently begun to shorten this and just call myself a troublemaker. Might look good on a business card.

What’s your thing right now? That thing. You know. That thing over there. What is that?

M: Movies, generally. Specifically, Falling for You, the romantic comedy Jason and I developed over the last several years.

J: The thing is our  first feature film, Falling for You (or FFY for short). It’s an independent romantic comedy about a woman named Hazel who has a fear of clowns, and is unaware that Oscar, the man she’s fallen in love with, is a clown. I produced, and Melissa directed. 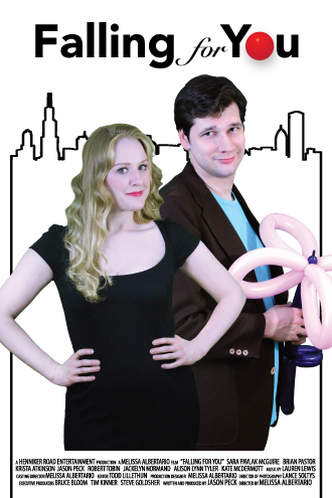 What do you love about this thing?

J: What I love about it is that we created something out of nothing. And this thing we created makes people laugh. Not a lofty goal. But a noble one, I think.

M: I love Falling for You, because after several years it still makes me laugh and smile. It’s the kind of movie I would watch over and over, whenever. It’s charming, earnest, and polished. Great performances in there by Chicago actors Brian Pastor, Sara Pavlak McGuire, Krista Atkinson, Jackelyn Normand, Robert Tobin, and that Jason guy. I love that we were able to bring so much “theatre” to it, with long wide shots, vaudeville duo-style banter, and choreographed clowning.

Personally, I loved working with Jason on this project. Our life is a romantic comedy. FFY was there before we adopted our kitty (who is named Hazel) and before our two sons were born.  He and I work well together- I have a vision and he executes it, or he has an idea and I tweak it. Jason has been so protective of my dreams and ambitions over the years.  Having a family has recently become our top priority, naturally, and he makes sure that I don’t lose myself in the process of becoming a mom.

What do you dislike about this thing?

M: I will say I found the shooting process exhausting- bear in mind, I was working as Script Editor, Director, First AD, Wardrobe, Art Design, and Catering coordinator- seriously, so glamorous- but my learning curve was humongous and for that I am so grateful.  The differences between directing theatre and film are profound. There is no way to learn except by doing it. I’m excited to have something tangible, like a DVD, that I can show off to people. “I made this. I’m proud of it.”

Also, and I don’t mind if this sounds like whining- financing is hard. It’s so much more difficult and time-consuming than I expected.

J: What I dislike about it is that it’s still not finished. Getting enough money to complete the film has been a hard slog.

How and why did this thing get started? How long has it been going on?

M: This is my first feature film, and it’s the culmination of many years of writing and directing theatre Chicago.  I actually studied Film for my undergraduate at SIUC, but I hated the post-production element. In those days, we were shooting on film and doing manual conforming and editing on a Steenbeck, and it was NOT for me.  I remember the day our teacher told us we needed to use a light meter, and I thought to myself, “Nope.” I changed my major the next day. I loved the pre-pro element, though- writing, planning, casting, coordinating, so I changed to Theatre, and then after my BA I got an MFA in Theatre Directing in London.  I’ve been directing for fringe companies here in Chicago since 2003.

Falling for You has literally been a labor of love. We did our first staged reading back in October of 2010, a year after Jason and I had gotten married.  After many drafts, a crazy whirlwind 52-day shoot (that was nights and weekends, working around everyone’s day jobs and commitments), it’s almost through picture editing and… it’s almost within reach. What a journey. It’s going to be amazing to cross that finish line together.

J: I had the idea for FFY, which was originally a play about ten years ago. I wrote it as a play, but never did anything with it. It really wanted to be a screenplay. Then after I emigrated, one of Mel’s friends produced a mixed media festival at a gallery in Chicago. I said I had a screenplay I’d like to have read. But I didn’t. She said sure and asked when I wanted to do the reading. I picked a day. I kept the core idea of the play, but wrote a brand new script (finally making it a screenplay) in about 3 weeks. Got some actors together and did the reading. It went well. People laughed. At the time we didn’t really want to do anything with it.

Cut to a couple of years later, Mel’s directing a play and I’m talking to Robert, one of the actors. He directed an indie movie when he lived in LA and asked to read the script. He did and convinced me to produce it. Mel and I managed to raise enough money to get into production. And we’re now trying to find more money to complete editing, edit the sound, pay a composer, enter festivals, etc.

When/how/where can people get some of the thing?

J: Well, our website is http://www.fallingforyouthemovie.com/ there you can find a trailer and look at behind the scenes pictures if that’s your thing. We also have a Facebook page where we post updates there will be updates about when it will be available to watch and buy. I’m hoping for sometime between now and the end of time.

What thing would you do if you had all the money and time in the world right now?

M: Obviously, I’d pay off everyone’s everything, then make brilliant investments for my kids’ futures, buy a sexy townhouse in London, and basically spend whatever it takes to live the jet set life. I’d become a majorly influential arts philanthropist and pump tons of money into CPS and all kinds of arts-in-education programs. I’d make art when I feel like making art, and become a Renaissance woman of international renown.  No big whoop.

J: Get our movie finished. Get a college fund for our two kids. Remove money worries. Buy a castle, because why not we have all the money. And then write more scripts and make more movies.

What’s your new favorite thing that someone else has done/made?

M: You want a name? Oh, man. The pressure…of a name. This is NEW things? Well, I’m loving all of the great TV right now, especially anything with a progressive and/or feminist lens. For a couple with so much going on and two kids, we watch a LOT of TV, thanks to streaming.   Also, personal homage to my sister in theatrical arms, Kaitlin Argeaux and her UK company, Théâtre Libre  (www.theatrelibre.co.uk).

J: My new favorite thing has been studying comedy screenwriting by reading and watching interviews with some of the top comedy screenwriters working today. Working screenwriters provide different creative processes. So I pulled together lots of notes into a short document for myself and I’m using those notes to work on my next screenplay. I can only occasionally do that work as my brain’s still focused on getting FFY finished, as well as looking after my two kids, which I do during the day. And maybe my other favorite things are the short film I wrote, the original sitcom pilot, and the late night comedy writer’s sample. I created all of them this year.

As you can imagine when people say to me; “I can’t do that creative thing now because I have a day job”, or when they say “I can’t do it, because I have a child now”, I look at the movie I created last year, as well as the other creative works I’ve made since my second son was born earlier this year and I think to myself “yeah, I know what you mean”. I have to work around naps. It’s challenging, but rewarding in its own way. I’ve also started teaching myself to edit. I figured, I’m tired through lack of sleep looking after my kids, why not burn the candle at 18 ends?

Possibly the most important question… If your thing was a pie, what kind of pie would it be?

J: Slice of pie? Easy. I’d be a slice of banoffee pie. It’s English. It’s a pie with a Graham Cracker base, bananas, toffee, and heavy whipped cream. Don’t let anyone ever tell you British food is awful. Banoffee Pie is the nectar of the gods. Or, continue thinking it’s awful so I get all the banoffee pie to myself and have the figure of late in life Orson Welles.

M: Jason answered what HE would be if he were a pie, but since he didn’t answer the actual question, I can. Falling For You would be a Shaving Cream Pie, of course! Because, clowns! 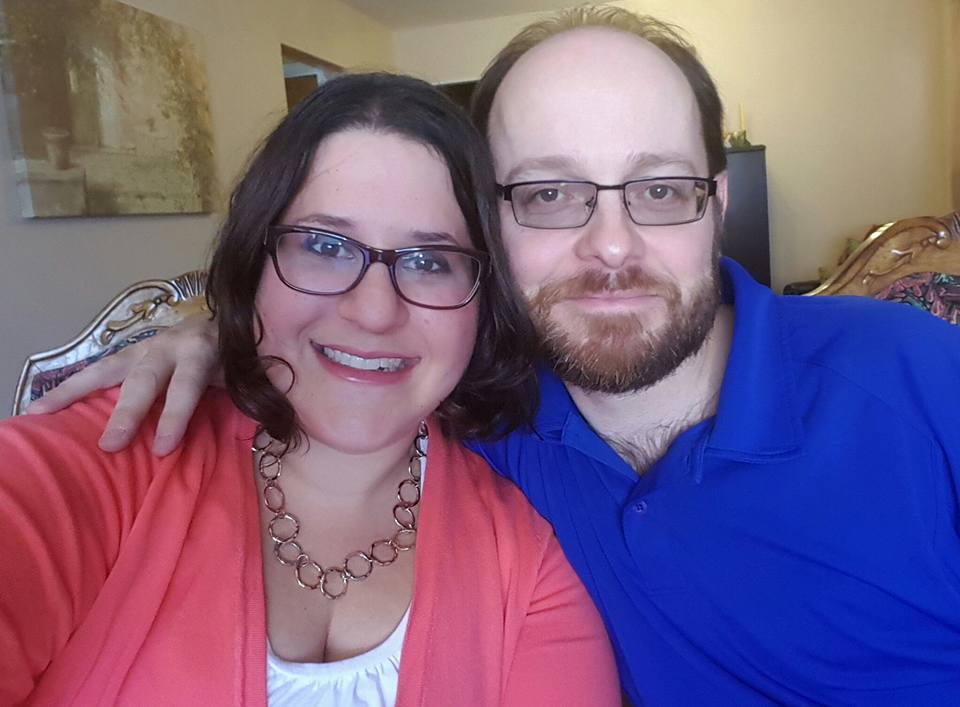 Jason Peck and Melissa Albertario are two incredibly lovely, smart, and creative humans. In addition to creating a sweet and funny film they have created two adorable offspring, making them some of the most all-around impressive people I know. I first met Jason doing a panto at Piccolo Theatre, and we soon realized that we shared a list of comedy idols as well as a similar sense of humor. I am so immensely proud to know both of them, and while I am sad I wasn’t able to participate in the making of “Falling For You,” I can’t wait to see the film in its completed state, and I can’t wait to see what else they’ll come up with.

You can help make Falling For You happen by clicking here and donating!