So… I am not super good at playing video games, but I am really solid at watching other people play video games and enjoying the art, the technical achievements, and the storytelling for all it’s worth. Especially when the game is beautiful, richly animated, excellently voice-acted, and jaw-droppingly well written.

The other night, the Fella got sucked into playing a new release on Steam called Firewatch. Released on February 9th, 2016 from Campo Santo, this is a first-person ‘adventure’ game, in the spirit of ye old point-and-click (which is my jam) with a small but phenomenal voice cast and unfathomably gorgeous landscapes. We immediately fell for the lush use of wilderness, the breathtaking quality of light, and the game’s simple, straightforward functionality. We ended up playing for about three and a half hours straight through because the story completely derailed every plan we had for getting other things done that night…

Firewatch opens with a text-based prologue. Clicking on parts of the text progresses you to the next bit of text, the next tidbit of story. You are Henry, and this prologue is about how you met your wife, Julia, and what happens during the course of that relationship. As our roommate Bill warned us: “This prologue is almost as bad as Up.” Without telling you why, I’ll say this: he’s not wrong.

When the game itself begins, it is the summer of 1989, and you (Henry) have taken a job as a lookout for the park service in Shoshone National Forest. Your post is Two Forks Lookout, and there isn’t a soul around for miles except for your boss, the sharp-tongued, banter-inclined Delilah in Thorofare Lookout. Henry and Delilah communicate only through walkie-talkie, which, combined with the first-person perspective of the game, creates a sense of isolation that contributes heavily to the beauty of the graphics and also the mystery of the story. To be fair, isolation is the main draw of this job, and it’s what Henry was craving when he took the opportunity. 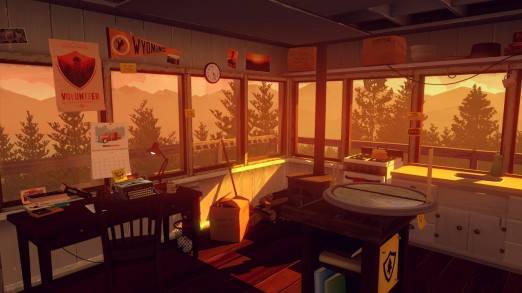 I really don’t want to say too much about why Henry takes the job, or what actually happens within the game, because it’s that good. I’m not even going to link or embed a trailer for the game – I’m serious. I went in with zero knowledge other than having heard the game’s name in the last week as something “definitely worth playing.” The graphics really got me, and as I visited Wyoming myself for the first time this past summer, I found myself transported between the game’s setting and my memories of the mountains, the fresh air, and the warm sun.

As Henry, you are assigned as lookout to Two Forks tower. Delilah, from the radio, instructs you on locations to visit and things to investigate. For starters, someone is setting off fireworks in the middle of the afternoon on your first day – this is an obvious fire hazard (not to mention illegal), so Delilah has you go “put a stop to it.” You carry a pack with supplies including rope, a compass, a map, and the walkie-talkie. Throughout the map there are supply caches for rangers and other lookouts – most of the caches are pretty barren but each one has something you can use, so they’re all worth hitting at some point in the game.

Much of the game is exploring the landscape, walking from point A to point B and back to point C to get something before returning to point A again, etc. It has a lot to do with story, and events unfolding naturally around you. There isn’t a lot of problem solving or puzzle-work, nor is it high-octane action. But I can tell you that this story is moving, the scenery is beautiful, and the voice acting is stellar.

Mad Men’s Rich Sommer voices Henry in an appropriately Everyman-ish way – Henry isn’t perfect, and his life has been full of unexpected bumps in the road, but he carries on the best he can. There’s a kind of apologetic sense of humor he tries awkwardly to use from time to time, and although Delilah keeps him on his toes, he’s nowhere near as quick as she is. Video game voice veteran Cissy Jones is Delilah, and shifts easily between demanding boss and lonely, uncertain friend in the wilderness. The relationship between Henry and Delilah over the radio immediately reminded me of the first BioShock, where the player receives instruction from Atlas via the radio. It heightens suspense and the reactions of our imagination, since we aren’t physically accompanied by that person but can only hear their voice.

The game interface has decision-based dialogue which later influences slight variations in the story, as popularized by Telltale Games; this is no doubt because two of Campo Santo’s developers (Jake Rodkin and Sean Vanaman) were employed by Telltale on its game The Walking Dead. The game’s aesthetic was designed by artist Olly Moss, and interpreted/actualized (jaw-droppingly, might I add) by lead environment artist Jane Ng.

I cannot stress enough how amazing the visuals are. Jane Ng = my new hero. The environment is unbelievably beautiful. I cannot begin to process how difficult this must have been to accomplish and how mind-meltingly awed I am.

Well, Chuck Wendig already did a right bang-up piece about storytelling lessons embedded in this game — but if you click, beware of spoilers.

The music in this game is wonderful, transportive, and chillingly lovely. At turns it feels daunting and eerie, and at other moments it has the calming, melancholic nature of a Decemberists album instrumental B-side. Check it out on Bandcamp for some Wyoming wilderness feels.

As someone who is admittedly not good at first person games – especially first person shooters – I have to say that this game is not terribly complex or difficult to play. Which is wonderful, because what that means is the story takes center stage hand in hand with the setting. Rather than be bogged down by controls, game mechanics, and skill requirements/execution, Firewatch is pretty much a story that lives of its own accord, rather than a tale that is only given life when you (the player) are involved directly in the action. I admire this a great deal; I think that video games are one of the most phenomenal and interesting storytelling mediums of the modern era. They do something that a movie cannot by allowing you to experience the story from within as it unfolds.

Firewatch does this in an extraordinary, nuanced, simple way… with an excellent ride of doubt, fear, confusion, paranoia, and unexpected emotional depth.

It has haunted me for the last several days since we played it – and I am still slowly turning the time-worn smooth stones of the game over in my mind, feeling the warmth of the summer, hearing the birds, smelling the smoke on the wind.

It is a moving, lovely, game with an incredible sensory experience. I really, really recommend you give it a go.