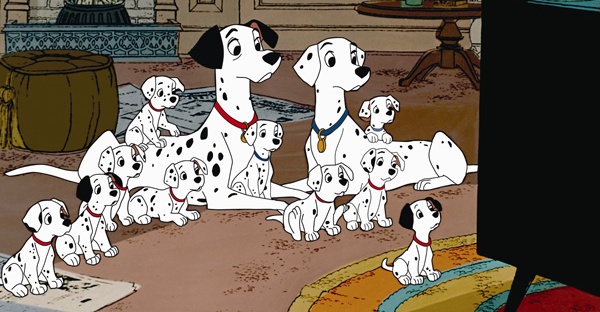 (Answer: Pretty sure it’s those other 80 puppies you guys picked up in the country. HOO BOY.)

A few weeks ago we sat down with our friend Candace (who is an award-winning author and also one of my Patreon patrons) to watch One Hundred and One Dalmatians on a chilly Saturday in Chicago. Candace was excited to join us, and we were so happy to have her with us, but lo and behold – our first real technical difficulty took place. We recorded the Discussion successfully, but not the Commentary – the track stopped recording at about 18 seconds in, for some reason, and as there was no way for me to notice this until the movie ended, we were left without a Commentary track and without any audio for me to base the Observations post on.

After some debate and deliberation, the Fella and I decided that we’d try to make it up to the Patreon patrons another way at another time, but to continue on with the Odyssey as is.

That being said, we thought that Candace was spot on about her comments during our viewing of the film and while losing the audio was ruff, we’d like to have her back again sometime to woof philosophic about another film in the Disney Odyssey.

All right, all right. On with the show!

The Film: One Hundred and One Dalmatians (1961)

And just for fun… Here’s me with a dalmatian birthday cake. Epic.

Up Next: The Sword in the Stone!

Looking for the hilarious audio commentary? Consider joining me over at the Patreon – as a patron, you’ll get the audio commentary, fun behind the scenes updates about other projects, and more!

1 thought on “Disney Odyssey #17 – What’s Black and White and Probably Not Paper-Trained?”